These users thanked the author kevin for the post:
stooy

These users thanked the author azazel for the post:
kevin

“As soon as you miss a fairway, you’ve no chance,” says English pro Eddie Pepperell, who is ranked 33rd in the world but missed the cut after firing 76-75 (11 over par). “A 15-handicapper wouldn’t break 120. Not even close. The greens are so raised, and there’s rough in front of all the greens, so you can’t miss the fairway and still get to the greens. The rough surprised me, how thick it was.”

Pat Perez, who fired 68-73, was even more emphatic. “A 20-handicapper would not break 200,” he said. “Impossible. They would never finish. I don’t think there’s enough daylight. The rough is very thick, it’s very long, if they got in the rough and couldn’t get out of the rough, they would never get to the green. And when they do hit the green, they’re running 14 on the Stimp with a lot of slope. It’s just very difficult. There’s a lot of disasters out there.”

Club pro Rob Labritz made the cut on the number this week. He’s won three New York State Opens at Bethpage Black and has seen first-hand how difficult the course can be. “I play in the New York State Open Pro-Am every year,” he told me. “And I play with amateurs that range from 3-handicaps to 36-handicaps. One year, I had four mid-handicappers — I’ll say 12 to 13 — and they didn’t make anything better than a double bogey, amongst the four of them, the entire round. And that was with the tees playing up a little bit. It is one of the hardest golf courses that you can step foot on lengthwise, and penalty-wise.”
Top 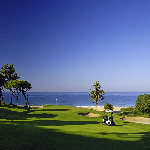